By Timewatch Media Cloud products, Industy, Microsoft, Timewatch in the media No Comments

Timewatch CEO Graeme Wright has been quoted in the Sydney Morning Herald in a story about the launch of the new Microsoft Office 2016. 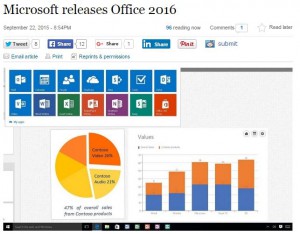 Timewatch is featured in the Sydney Morning Herald on September 22, 2015.

Wright’s expert opinion was sought on workplace collaboration and the benefits of Office 2016 over Google. Wright noted many Timewatch customers had switched from Office to Google for workplace apps but the arrival of Office 2016 may reverse that trend:

“Interestingly, feedback from users is that they preferred MS-Office but their company IT team preferred Google. But Microsoft now delivers the best of both worlds, a cloud first solution with the familiar functionally-rich, MS-Office suite available on any device.” 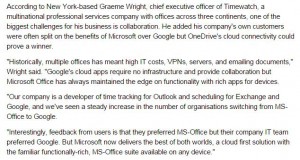 As revealed in the article, Microsoft Office 2016 was launched at an event in New York City on September 17.

© 2023 Timewatch. Timewatch®, Time®, WhiteSpace®, Time&Space® and Wallchart® are all registered trademarks of Timewatch pc.
All rights reserved, all other trademarks acknowledged.
Wallchart is a Timewatch company.